Swiss police tighten the circle around Fancy Bears, but more news could come from Italy. Is just a few hours ago the news of a Swiss investigation about the cyber attacks against WADA by the phantom group of Russian hackers. The proceedings, launched in March 2017 but only now known, are conducted “on charges of political espionage” against two Russian spies already arrested in the Netherlands (and extradited to Russia) following an operation in joint intelligence service between Great Britain, Switzerland and Netherlands. The story of the hackers however, has an unexpected implication, which could open a new line of investigation in Italy.

Last Friday was the lawyer Gerhard Brandstätter (defender of Alex Schwazer in the second criminal trial against him after the last doping disqualification of 2016) to present to the judge Walter Pelino a printed email copy between an IAAF official and a legal counsel, claiming that would be a proof of the plot against his client. It would then be email communications between an IAAF lawyer and his client (the IAAF), never admissible to the investigation, but we must also remember that this email is the result of the exploit (with theft of 23 specific emails) made by Fancy Bears against the IAAF at the beginning of 2017, so it would be surprising if the italian judge took into account the inconsistent material in the content, of doubtful reliability but above all of illicit origin.

The story of stolen emails, however, could also involve the Italian journalist Nando Sanvito, who on June 28, 2017, he first published an article on their content, less than 7 days prior to its release on hacker’s website, which occurred July 5, 2017 (as confirmed by their post on twitter with its screenshot). In the article in question, Sanvito spoke in detail about the contents of these emails, writing that were“turning in some editorial offices, the stolen files … to the IAAF computer system, from a Fancy Bear blitz”; this statement, however, would be devoid of evidence, as the Italian journalist was the only one to write such content, and in fact the other media that treated the story in those 7 days, used his article as only source because the emails were not available. It was only after the actual publication of the emails, so from 5 July 2017 onwards, that the other media began to publish original articles. 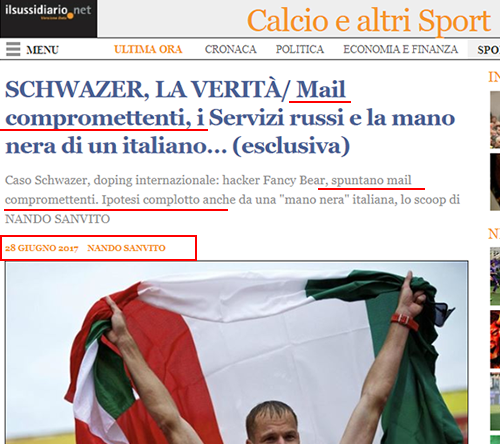 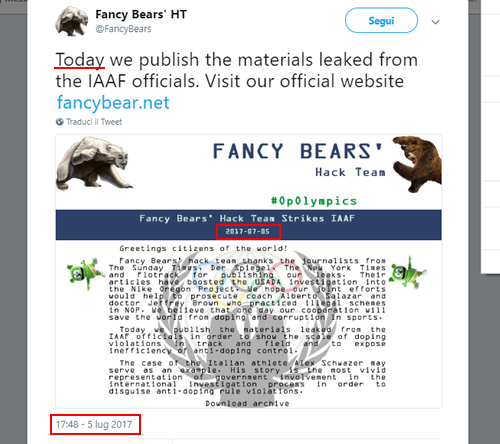 The 7 days in advance of the “scoop” by Nando Sanvito on the actual availability of these emails, may have made suspicious Monegasque investigators who, after complaint of the IAAF following the theft of emails at the beginning of 2017, they already had that year opened an investigation parallel to that of the Swiss police, to shed light on each other, as the same spread of specific emails on the Schwazer case, even if from the irrelevant content, would hypothesize a targeted attack by hackers. In addition, the pre-clairvoyance of a single reporter (very close to the staff of the former South Tyrolean athlete) could indicate the existence of a preferential channel with hackers or a direct contact. To reinforce this hypothesis a detail noticed only in these last days: on the hacker’s website, the date of publication of the e-mails was oddly modified by anticipating it on June 22, 2017 (the change would have been executed in August 22, 2017), as if they wanted to cover a “hurried” publication by Nando Sanvito. The representatives of the IAAF at this time would be just having a meeting with the investigators to take stock of the situation. 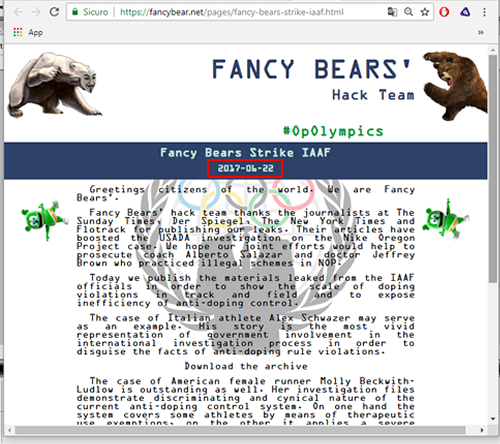 Update September 20, 2018: we learn what reported from the news published today on ilsussidiario.net . We have sent an email to the Director of ilsussidiario.net to have Nando Sanvito’s references and propose an interview in which he will have the right to reply. At the moment we have not received an answer yet