Italian athletics take sides to defend the 50km. The President of FIDAL (italian athletics Federation) Alfio Giomi, interviewed a few days ago on the issue 50Km responded clearly, according to Adnkronos news published on Sportfair website.

“We are absolutely against the abolition of the 50 km, we have already communicated to the IAAF and we hope that other federations will be heard and that can review this decision that we consider wrong”. He Alfio Giomi, the President of Fidal , told to Adnkronos about the possible elimination of the racewalking 50 km from the Olympic program, starting from Paris 2024 Olympics. “Our opposition was put writing a letter sent to the IAAF Council that will have to make the decision in Doha meeting,  on March 10/11. We also told Anna Riccardi, the Italian representative in the Council, and we hope well “. “The intentions of CIO and Iaaf is to make the races ‘more appealing in TV’ but in my opinion is the wrong direction. Athletes are not more attractive by changing the races, rather by investing more in technology “, concludes the number one in Italian athletics.) 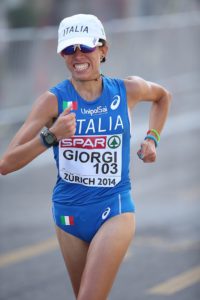 Eleonora Giorgi this year will compete on 50Km. She criticized the proposals of the IAAF Racewalking committee , also defending the newly acquired right by women of racewalking. Her words as reported by newspaper LA STAMPA last 9 February

«It seems like a step back, the 10 km danger of becoming a “fashion show” of racewalking and then why for women the 50Km can not be an Olympic race? Women now also compete in ultramarathon»

Two great champions of the past, however, used different ways to express their disappointment. 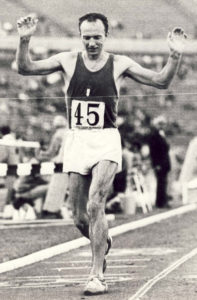 «Abolishing the 50 km means killing racewalking. It’s a ridiculous decision, taken by people who are slaves of strong powers» … «They are swapping a real sport, which has an endless history, with disciplines that make people laugh. The problem is that 50 is too long for the TV? They do not show it all, like the stages of cycling. Too tiring? But if we also did the 100 km and no one died! And women? First they promote them on 50 and then they reject them…» … «It would have been better to eliminate racewalking altogether. I would have preferred to have won the Olympic gold in an extinct sport, which in one reduced like this» 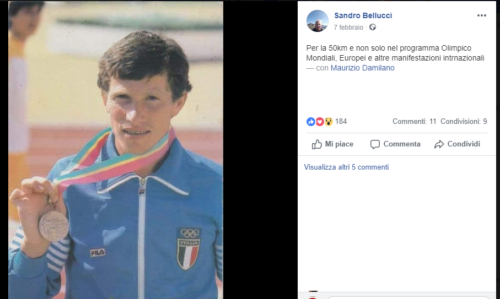 The opinion of Sandro Bellucci (third on the 50Km in Los Angeles 1984), is short but very significant. He only uses a photo of him with the Olympic bronze around his neck, sharing it on Facebook. It may seem like little to write only «For the 50km and not only in the program of the Olympic, World, European Championships and other international events» but in his post was tagged Maurizio Damilano, a direct and unequivocal message.